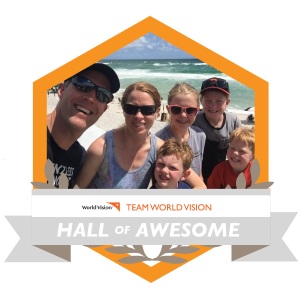 In July of 2013, Cory Scheer was in a life-threatening bike accident. Miraculously, he walked out of the hospital 2 days later, but, as you might expect, his life was never the same.

That same year, Cory started on a journey of running 12 marathons in 12 months, calling it “The Basic Needs Marathon Challenge,” raising money for 5 different charities over the course of the year. His incredible story—and his commitment to helping others through the telling of it—landed him a finalist spot in a Runner’s World Cover Contest in 2014.

That’s when Cory met Rusty, a Team World Vision staff person and fellow Runner’s World finalist. Passionate about helping meet the basic needs of children through running, Team World Vision became a perfect fit for Cory. The problem was, Team World Vision didn’t have an event in Cory’s hometown of Kansas City, Missouri. So Cory, with crucial encouragement and involvement from his family, helped change that. 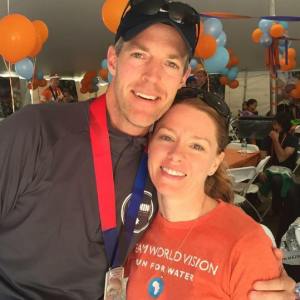 In 2015, Cory and his wife, Jamie, volunteered to co-captain a team from their church–Pleasant Valley Baptist Church–and run the Kansas City Marathon and Half Marathon. In the first year, they had a goal of getting 100 people from KC to run and raise $100,000. Well, as Cory said, “For us, Team World Vision has been about continual exceeding of expectations. We think we’ve accomplished something, but then God does more.” In their first year, the KC team was almost 300 runners strong and raised $210,000.

“Jamie has been an incredible volunteer,” says Cory. She is a physical and nutritional therapist and has helped lots of her teammates as they’ve trained for the race. “This has not just been about one person, we’ve truly had a co-captain model,” said Cory. 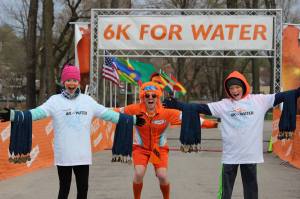 And they haven’t stopped there. Cory and Jamie’s kids—Cailyn (13), Isaac (11), Evan (5), and Levi (5)—have been clean water advocates as well. The kids are always at group runs cheering people on, have volunteered at the World Vision 6K for Water, and even organized fundraisers for clean water at their school. “It’s important to us that any time we can model a life of generosity, we do it. And the only way our kids can learn that is to be involved and participate,” Cory says.

This year, the Scheers are at it again. They are key volunteer leaders in Kansas City, spreading the word about how to run for clean water with Team World Vision. There are already over 600 people signed up for the Kansas City Marathon in October (2 of which are Cory and Jamie of course).

As Cory reflected recently on the 3-year anniversary of his accident, he wrote: “By God’s grace and His grace alone, the “tragedy” has been transformed into a new trajectory. My family’s entire frame of reference has moved further away from entitlement and more towards gratitude. Had I not gone through this experience, I may have never connected with Team World Vision, an organization mobilizing thousands of people to raise millions of dollars to end the water crisis in Africa. The work of providing clean water goes on. We each have an opportunity, by God’s grace and grace alone, to create a new trajectory for those living in tragic circumstances.”

Thank you, Scheer Family, for your incredibly generous commitment of time, resources, and influence in order to help create a better world for children in need. You ALL have played an essential role in bringing Team World Vision to a new city, and with you, we stand in awe of the work God is doing as a result of your willingness to serve. Thank you for your leadership in Kansas City and beyond.

Have some encouragement? Cancel reply

Know someone who should be inducted into the Hall of Awesome?