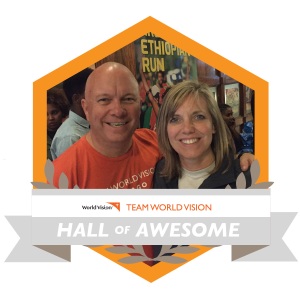 It started with Evan. After five years of running half marathons, Evan’s friends urged him to run a full marathon. “And you have to do it with Team World Vision,” they said. So he did.

One day to cure his boredom on a dreaded treadmill run, Evan started to visualize what it would be like finishing the Chicago Marathon; all of those people on the sidelines cheering him on to the finish line. And suddenly, out of nowhere, all of those faces in the crowd turned to faces of women and children in Africa. “That’s when I knew this was really important,” Evan said, “It’s not running plus clean water. It’s clean water plus running.”

While Evan trained for his first marathon, Debbie watched. She had done many triathlons, but they had always been about her own challenge, satisfaction, or fun. She never really liked running, but when she was cheering Evan on through his marathon, something clicked. She saw the beauty of the team working together, cheering each other on, and she thought, “I think I’m going to have to do this.” She knew that it was God stirring up something in her heart. 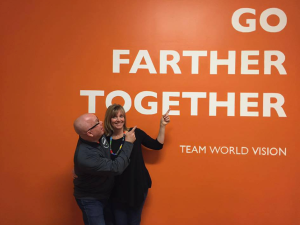 What’s awesome about Evan and Debbie’s story is that they have been individually and uniquely moved to run for clean water as a couple. On the eve of an empty nest, Evan and Debbie have thought a lot about what life is going to look like for them without kids at home. “We see couples who come to the point of being empty-nesters and don’t know what to do with each other,” Evan explained. “We want to do something of importance with our lives, together.” So the McBrooms not only continue to run races and fundraise with Team World Vision, but they have helped lead and launch new teams all over the Indianapolis area.

Evan and Debbie talk about Psalm 37:4: “Delight in the Lord and he will give you the desires of your heart.” Neither of them had a life-long passion for running or for clean water that led them to join Team World Vision. But they say they have seen how God has placed new desires in their hearts—to live a life of importance, to serve in ministry as a couple, to care for the poor, to combine a love of fitness with clean water—and how He is making those desires come about.

Remember the image Evan saw on the treadmill a few years ago? Well this year, Evan and Debbie traveled to Ethiopia to see some of World Vision’s work. It was there, a few years after that treadmill run, that the image became real: they saw women and children celebrating that they now have access to clean water. It was like all of the puzzle pieces of their journey, all of the desires that God had been placing on their hearts, finally came together into a beautiful picture, Debbie described. “We’re just grateful that God is letting us live this story.”

Thank you, Evan and Debbie, for your example of joyful faithfulness and service to others, together.

Have you seen Evan’s Ridiculous Clean Water Music Video? It helped him raise enough money to provide 125 people with clean water in 2014. This year, Evan and Debbie’s goals total $13,000! 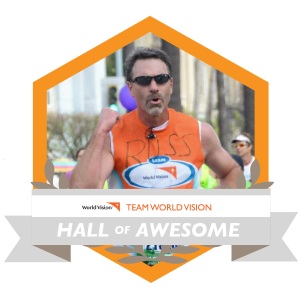 Russ Funk was scheduled to have knee replacement surgery in September of 2010. It was a hard reality to face having been an athlete in high school and college. But after 25 years of arthritis developing in his knees, he couldn’t escape it. His knees were in constant pain.

So it came as a shock when Russ announced to his family that he would be running a half marathon with Team World Vision that year. (You might already know that you can’t run on knee replacements.)

Russ had rescheduled his knee surgery in order to run the race instead. He couldn’t sit without aching and moaning, he hadn’t run a step in 25 years, and the race was 12 weeks away. Never mind that just a month earlier when asked how many races he had run, he had humbly replied, “None. Running is not in the cards for me.”

But when he had asked his doctor about running the half marathon, the doctor told him, “Your knees are already shot, so if you can stand the pain, you might as well completely break them.” So Russ decided to reshuffle his cards.

He indeed ran that half marathon in 2010, and since then has completed 20 half marathons, 2 full marathons, and 7 triathlons (including a Half Ironman) on behalf of kids in Africa. He’s been a team captain in Phoenix, encouraged team members across their finish lines, and traveled to Africa with his wife, Pam, to meet their sponsored child in Kenya.

And on March 19, 2016, Russ ran the World Vision Global 6K for Water in his hometown of Phoenix. After 5 years of defying the odds, Russ celebrated his last running event with 8,000 of his closest friends across the country. Just 10 days later, Russ finally had that knee replacement.

But that won’t stop him from doing whatever he can to help provide clean water to communities in Africa. At the Global 6K, Russ talked about taking on the Legacy challenge this year and what events he could do to help him raise $10,000. He’s already signed up for a triathlon relay with his sons (he’ll do the swimming and biking portions), and is looking into cycling events for once he has recovered from surgery.

Russ, for five years you’ve endured relentless pain for the sake of others. You’ve literally broken your knees to care for children around the world. You’ve run for water, hope, and life. You are an inspiration to all who know you and we’re so thankful to have you on the team. Here’s to many more races!

Know someone who should be inducted into the Hall of Awesome?